McFarlane Toys will have a great lineup of AMC’s The Walking Dead line coming up. Here is a preview of what is to come in the coming months

Here is the 10-Inch figure of Negan Here is the Color Tops of Ezekiel There is also an Allies Deluxe Set of Rick Grimes, Jesus and Daryl Dixon And finally, Here is Daryl Dixon in his prisoner outfit taken from Season 7, Episode 3 of The Walking Dead Check out our reviews of this awesome line! Thanks goes to Playmates for the review samples.

And please check out this awesome review of T-Sprints Mikey!

Thanks for stopping by! 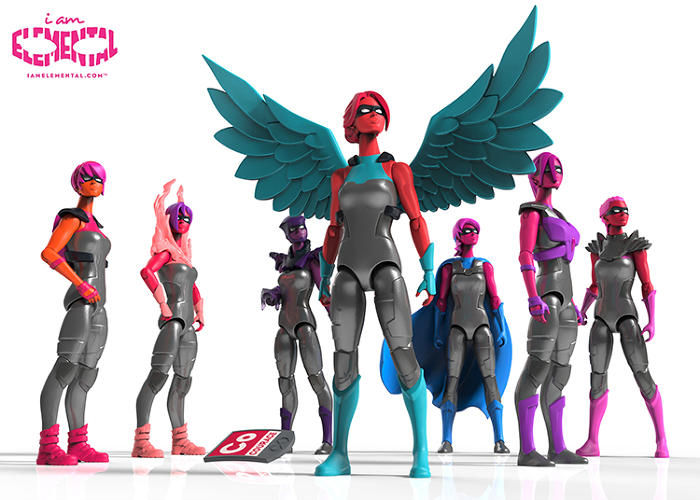 Check out IAmElemental at Toy Fair 2016!

Big thanks to IAmElemental for hosting us and until next time!

Here is the walkthrough of Aurora Toys at Toy Fair 2016 This past week was the four day trade show known as Toy Fair.  Taking place in New York City, countless companies from Diamond Select Toys to Dark Horse converge upon the Javits Center.  It’s easy to get caught up in the excitement of movie licenses, major product reveals, and the enthusiasm for seeing products that no one else will get to see until it hits store shelves.  However, it’s rather simple that during the four day marathon of appointment after appointment, that one could easily overlook some of the more sincere of companies; the ones working at creating something innovative, challenging, and worth while.  During our second day at Toy Fair, I made an effort to check out more of the show floor ​ ​and I visited New York based company, Wonderhood Toys.

Wonderhood Toys, centering on the main theme of “empower young girls [ages 4 to 10] to be the architects of their own futures”, and founded by Solange Schipani and Andrea Hollander, was started out of a desire to “create something new and unique.”  Schipani and Hollander were both on hand at Toy Fair and proudly showcased their Wonderhood Main Street Maker (TM), including the Grand Hotel and Corner Shops.  With a hope to create a new toy, geared towards girls, Schipani and Hollander are aiming to help inspire young girls (and boys) to build “possibilities.”

Wonderhood Toys’ Main Street Maker, due out in the Third Quarter of 2016, are really quite the exciting toys.  It’s hard to even consider them toys as it feels as if the word toy, as defined by today’s standards, is just below the quality of what Solange Schipani and Andrea Hollander have created.  The Main Street Maker is a building set based on 24 dual-sided, 5 inch square design panels, with 30 connectors to help engineer a 4-story “complex structure.”  While children can build Main Street’s Grand Hotel and Corner Shops as they see depicted on the product packaging, it is Schipani’s hope to see children inspired to imagine, design, and construct buildings of their own design.

Interestingly, unlike building sets like Lego, Mega Blocks, and the like, Wonderhood Toys’ Main Street Maker also comes with an activity journal which “poses design challenges” and introduces the characters of Chelsea, Erik, and Emmie.  Chelsea is “a budding architect” and Emmie is “an aspiring food scientist.”  Schipani helped create the idea and the base line of the Main Street story and characters, along with a talented group that helped flesh out the world they have built for their toy line.  Each figure comes with the building set and there are ideas of adding more characters and square design panels to help build more of an interactive world.

Considered “two moms on a mission”, Wonderhood Toys is the company to watch.  As much as I love super hero figures and comic book collectibles, seeing actual toys on the market that are trying to inspire imaginations and foster creativity at an age that is so easily shaped by what’s force fed through media, it’s very exciting to see what Solange Schipani and Andrea Hollander are up to.  Helping build “STEM” skills (Science, Technology, Engineering, and Math”), Wonderhood far exceeds the cookie cutter approach to most figures and toys we now see at nearly every Target, Toys R’ Us, and “mom and pop” shop.

To find out more on Wonderhood, please make sure to visit www.wonderhoodtoys.com