On August 18th, Maid Cafe NY officially open to a packed crowd.
But have they given the fans the true Maid Cafe experience? Or at least made changes that we had so desperately asked for?

Lets first explain what an actual maid cafe should be: Maid cafes (メイド喫茶 / メイドカフェ Meido kissa / Meido kafe?) are a subcategory of cosplay style restaurants found predominantly in Japan. In these cafes, waitresses dressed in maid costumes act as servants and treat customers as masters (and mistresses) in a private home, rather than as cafe patrons. 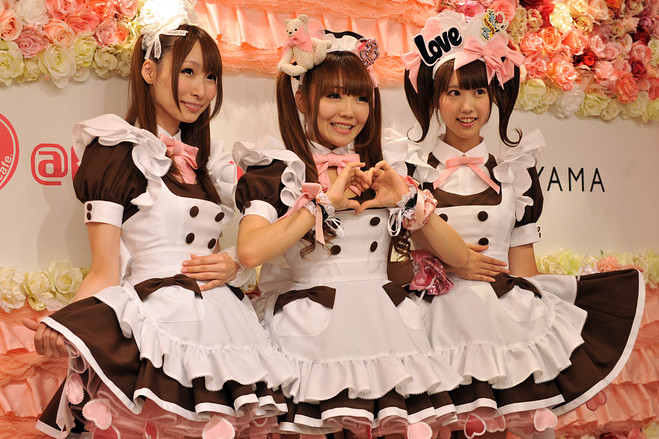 Maid cafes come in all shapes and sizes. Most provided a vivid depiction of master and servant without crossing the ecchi line (creepy). Usually, the cafes aren’t about the level of food but more about the experience. It’s a little weird to Westerners because you’re basically waited on hand-and-foot.

So, our correspondents attended the grand opening only to find that nothing has changed at all. and no actual “Maid” service. They had J-Pop music and girls on stage but this was just for the event and held in a separate restaurant above. Plus, there was a 5 dollar cover charge, for a cafe grand opening? They did nothing to bring the true experience of a Maid Cafe to life. Most of the girls looked as if they didn’t even want to be there. This is a grave mistake and we feel the owner, who is Japanese, is “phoning it in” just to make a quick buck and figured Americans wouldn’t even know the difference, but we do. The Japanese Curry was sub par and the lack of decor was still uneventful and empty. If they would have called this an Express Maid Cafe or something else, fine, but making a Maid Cafe without the interaction is like going to Disney and not meeting Mickey or Goofy or riding on any rides. In the end, we were hoping to recapture the unique and wonderful experience we had in Tokyo, but all we got was a watered down sweet shop with some young women dressed in maid outfits. This is not the same thing as an actual Maid Cafe.

So to all the Otakus and Japanese fans looking for something you only read about in Manga or seen in Anime and J-Dorama, look somewhere else. The best thing to do is to buy a plane ticket and head to Akihabara or Ikebukuro.