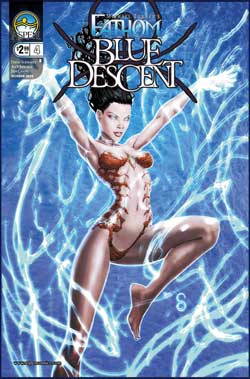 “Aspen Matthews is a child of two worlds. Born amongst the Blue, an underwater race, she was raised on the surface among humans. As a marine biologist aboard the experimental DMD facility she was awakened to her true heritage. Aspen, along with the help of Cannon Hawke, Protector of the Elite Council of the Blue, foiled a plot by the Blue dissident Killian to destroy both the surface and underwater worlds.

However, uncertainty remained concerning the events leading up to Aspen’s remarkable appearance on the Paradise ocean liner and the obscured truth surrounding her parents below the surface—until now…

Amidst the chaos and dangers within the secret citadel of the Black, Abseloma managed to find and rescue his captive wife Eilah. Now, the weight of the future of an entire civilization threatens to crush his plans for escape, as well as the Black’s powerful leader Rahger, who is still after both of their lives and closing in fast…”

This is the fourth book in Aspen Matthews’ origin story and it really ties up the loose ends well. I’m still not really clear why the people of the Blue, the Black, and the Humans are all enemies but at least I now totally understand how Aspen got to the surface world and why and what happened to her parents.

As for the art, the book is just beautiful, underwater scenery can be difficult but I think Sanchez & Steigerwald do a great job. I have to admit I’m not a huge fan of this type of fantasy I find it to be too complicated and the dialogue a tad over the top. But even for me, someone with limited experience with this series, this was an enjoyable book.