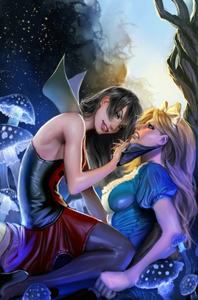 True every woman in the book is overly endowed and scantily clad but let’s move past that for a moment and focus on the story. Alice in Wonderland is a very old book, written in 1865 by Charles Lutwidge Dodgson under the pseudonym Lewis Carrol, (though I believe this comic is based on the 1872 novel Through the Looking-Glass, and What Alice Found There) it’s the story of the girl Alice who falls down a rabbit hole and has adventures with anthropomorphic creatures. It has been covered, parodied, retold, and re-imagined by countless authors, directors, artists and in countless mediums. So why would you read this one?

It’s pretty damn scary and really well done! Alice has just escaped from the clutches of The Jabberwocky, who is wonderfully freaky looking, and is continuing her journey through wonderland. But wonderland isn’t an easy place to travel, she immediately falls afoul of some of it’s denizens and is forced to fight for her life! In the meantime we see that there are forces at work trying to guide Alice’s journey, though the reasons have yet to be revealed!

All in all this book has strong characters which are beautifully, frighteningly, rendered. While the takes on the characters aren’t totally new, we’ve seen evil in wonderland before, they do have their own horrible twists. Two of my favorite Wonderlandians (that is SO totally a word!) in this version are The White Rabbit with his sick little red eyes and mottled fur and a very very sick evil looking Cheshire Cat.

Wonderland will work with any Anime or Mange !!!!!!!